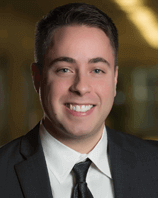 Kevin Bergstrom is a litigation associate at Rizzo Mattingly Bosworth, where his practice concentrates on the defense of complex civil cases. As a member of the firm’s environmental and natural resources practice group, Kevin represents clients in Federal EPA and Oregon DEQ Superfund cleanup matters. He also has an active practice defending both local and national companies in litigation involving toxic tort and product liability claims.

Kevin joined Rizzo Mattingly Bosworth in 2016, after earning his law degree from Lewis & Clark Law School in Portland. During law school, Kevin clerked for the Office of General Counsel at Bonneville Power Administration, a federal power marketing agency within the U.S. Department of Energy. Kevin also interned with the in-house legal team at Vestas-American Wind Technology, and worked as a practicum student with the Western Resources Legal Center, where he co-authored an appellate brief before the D.C. Court of Appeals.

In his free time, Kevin enjoys hiking, playing soccer, and spending time with his wife Deirdre.

LET US KNOW WHAT YOU THINK

Need more information or want
to get in touch?